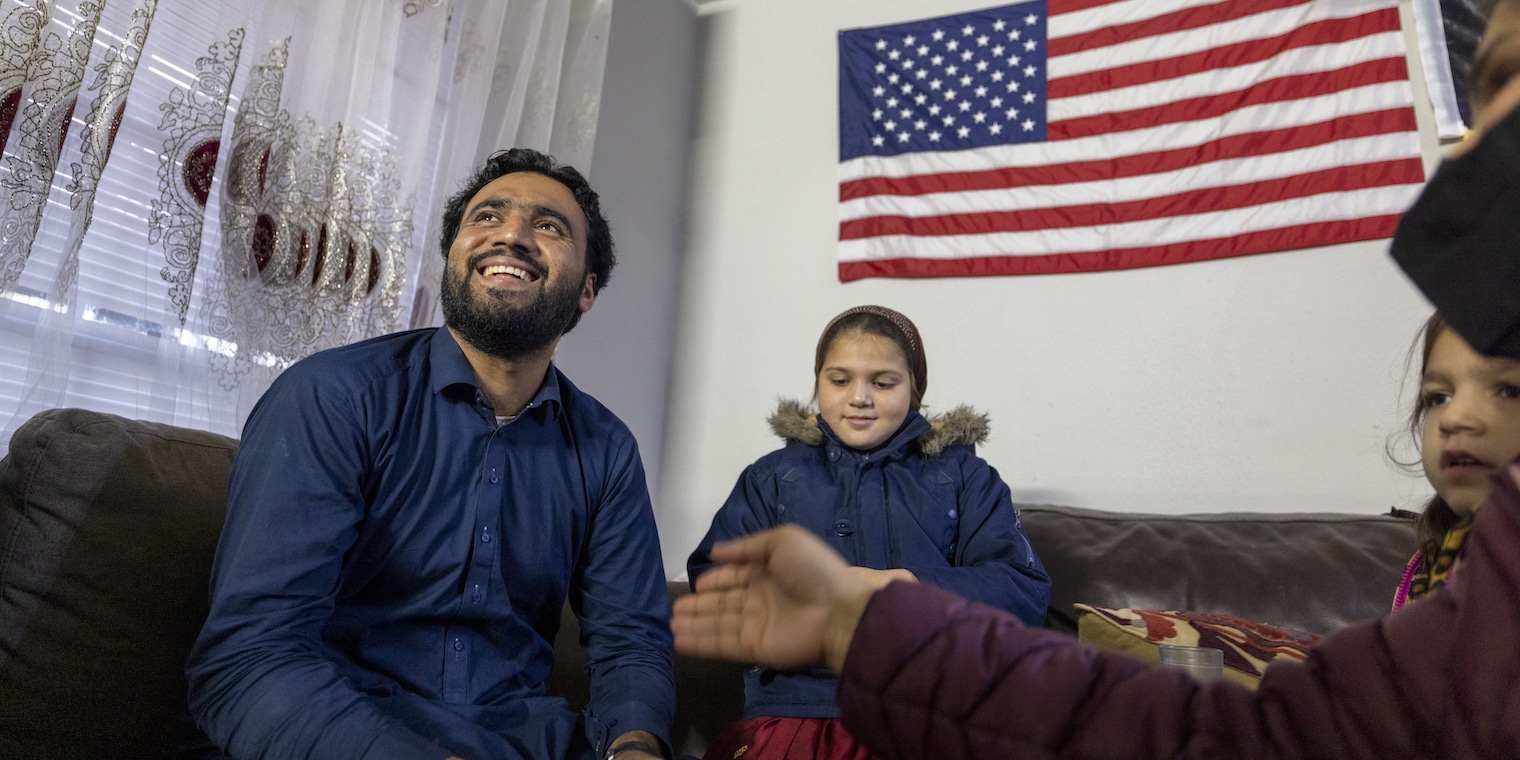 With Project HOPE's support, free and charitable clinics in Houston and McAllen, Texas are fighting misinformation, building trust, and improving access to vaccines.

For eight nights, Kalil and his wife slept outside the Kabul airport, waiting for the word.

Time was short. Taliban forces had moved into the city, and each transport plane that took off without them was one fewer chance for Kalil, a former Afghan soldier who worked with the U.S. Army, to get his wife to safety.

The rest of Kalil’s family was waiting for them in Texas, where they had resettled the year before. But there was no way to contact them from Kabul. Kalil’s mother could only follow the news and pray helplessly for her son to find his way out. When she saw a photo of an injured man who looked like him, she lost hope that she would ever see him again.

But on their ninth day outside the airport, Kalil and his wife received word: there was room for both of them on a plane. It would take them to Qatar, Germany, Washington, New Mexico, and then their new home, Houston, where they would reunite with their family.

“I didn’t think I had any chance,” he says. “But now I feel very safe and secure. Now I’m with my family. I’ve almost forgotten about the tough times because God helped me.”

Though Kalil found safety in Houston, other challenges were just beginning. U.S. refugees receive initial resettlement assistance, but he knew he would soon have to find his own job and health insurance in one of the biggest cities in the country. The eldest son, he would have to lead his family and ensure his siblings were provided for.

And a new threat, omicron, was just beginning to emerge.

Inside the family’s apartment, Kalil’s younger brothers and sisters circle up to receive their first COVID-19 vaccines. Through a program funded by the U.S. Health Resources and Services Administration, Project HOPE is improving access to the vaccine via free and charitable clinics, including San Jose Clinic in Houston, which regularly visits the apartment complex where the family lives.

All of Kalil’s siblings are enrolled in school, and the vaccine gives the family peace of mind as they adjust to their new life. It is a home that straddles two worlds: ornate cushions and rugs line the living room floor, recalling the family’s roots in Afghanistan. But there are two flags hanging on the wall — one for each of the countries they have now called home.

“We are really happy here,” Kalil says. “The kids are in school, so when we heard the vaccine was available for kids and it was safe for them to have it, we wanted them to be safe. Since we were able to get it here in our home, it was very convenient.”

Safety net clinics like San Jose Clinic play a crucial role in the community, providing primary care services for free or at a significant discount. And as COVID-19 continues to mutate and spread, the clinics are able to build close, trustworthy relationships with the community that often make the difference in convincing people to get vaccinated.

In the complex where Kalil lives, there are Congolese refugees, Pakistani migrants, and other recent arrivals from around the world. But the overwhelming majority of the families are from Afghanistan, and it can take a long time for the clinic to earn residents’ trust.

Jacqueline Ochoa, a community health worker hired through the program at San Jose Clinic, knocks on doors and visits with families weekly to educate them about the vaccine and counter any misinformation. It’s not uncommon for it to take as many as six visits to convince someone to get vaccinated, she says. But the most important thing is that the clinic is present, willing to listen, and ready when someone makes the choice.

“Public health has shown me that one of our biggest issues is misinformation on the internet and social media,” she says. “One of the most important things that I’ve noticed is that in order to get through to people, you have to have some kind of connection and trust.”

It is a busy morning at Ibn Sina clinic, as Aftab shuffles from station to station. There are cars lining up for drive-up tests, parents who have brought their kids to be vaccinated, and rows of patients there for the clinic’s free and reduced services.

Like San Jose Clinic, Ibn Sina serves Houston’s low-income and uninsured populations. The clinic was conducting about 100 COVID-19 tests a day even before omicron, and many of those arriving for tests are unvaccinated. The reasons vary, Aftab says — some say they are immune because they’ve had COVID-19, others say they don’t need it because they’ve never been sick, while others distrust the science behind the vaccine.

But because everyone has to wait 15 minutes for their test results, he uses the time to offer all of them the vaccine.

“I’m here to help the public understand the importance of science and give them education,” he says. “I’ve seen how hard scientists work. I’ve seen how hard doctors work, and we’re not in it for the money, because there’s no money for us. We’re here because we want to help.”

For Mariel, the decision to vaccinate her son was personal. In November, the two of them crossed the border into Texas after leaving their home in Venezuela. The arduous 15-day journey across Central America left the family tired, hungry, and sick. Vicente, 11, contracted COVID-19 while staying at a shelter on the border and was quarantined with a high fever for 11 days.

Now set up in their new home, the family has begun the immigration process and Vicente is fully recovered and ready to begin school. On a warm December morning, Mariel brought Vicente to Ibn Sina for his first dose. She didn’t fully trust the vaccine back in Venezuela, but she does now. Aftab provided the information that eased her mind.

“I’m more comfortable now,” Mariel says. “I can send him to school and know he is protected.”

For Kalil, Mariel, and Vicente, the barriers to the vaccine ended when they arrived in Texas. Three hundred miles south, near the U.S.-Mexico border in McAllen, the challenges look different.

Project HOPE is supporting the Hope Family Health Center and El Milagro Clinic, two safety-net clinics in McAllen that serve the Rio Grande Valley’s low-income, uninsured, and undocumented populations. Some patients are afraid to go to the doctor because they are undocumented. Others can’t afford to miss work, even for a short vaccine appointment.

Others, like Ramon, carry their burdens on the inside.

As a child, Ramon had a traumatic experience while getting a routine vaccine in Mexico. The trauma left him with a severe phobia of needles that he has carried his whole life. “I feel embarrassed sometimes, like I should be able to overcome these emotions,” he says. “But people don’t understand the emotional pain and trauma.”

Friends and co-workers were spreading misinformation about the vaccine, and he was unsure who to trust. When he went to his 35-year high school reunion, five classmates had died of COVID-19. In December, he caught the virus himself and thought he might die after it became hard to breathe.

“I was listening to the news and they were saying that hospitals were telling people they could no longer take patients,” he says. “So I said, ‘God, if this is my time, then I’m gonna go.'”

Ramon was coming to El Milagro regularly for other lab work. During each visit, the clinic’s team would work with him to answer his questions, counter any misinformation he might have heard, and overcome his fears.

“I was very hesitant to get it,” Ramon says. “And the doctor started telling me stories of some of her patients who were sitting in the exact chair I was in two weeks earlier, who were no longer here because they contracted the virus.”

Over time, Ramon developed a relationship with the clinic that he wouldn’t have gotten at a larger hospital or county health system. He lived in the same neighborhood as the doctor and had known her for many years. He could be honest with them about his fears and trust that they had his best interests at heart. Eventually, he agreed to get vaccinated. Then he convinced his neighbor. Now he’s working to convince his son, Jordan.

For many patients like Ramon, the relationships they form with the clinics make all the difference. For others, it’s a matter of access. Before Project HOPE’s arrival, El Milagro was only able to offer vaccines for half a day on Fridays, which made it hard even for people who wanted to get vaccinated. Now, the clinic has a dedicated vaccinator who offers shots every day. They also have a mobile clinic that goes out into the community each week to reach people who can’t drive to the clinic.

Though the challenges look different for everyone, the goal is the same: to build trust, connect people to care, and provide the information patients need to keep themselves and their families safe.

“It’s definitely worth it,” Ramon says. “First and foremost, you’re protecting yourself and those around you. And regardless of the misinformation that’s out there, you need to trust the professionals that are in the trenches fighting these diseases, because they have first-hand knowledge of what’s going on. They’re doing it for you to save lives.” Even as we face major threats to global health, we’re still making – and protecting – progress toward a healthier, more resilient world. Here are five global health trends to be optimistic about in 2022.
Read more

We Don’t Have To Accept Our ‘New Normal’

As we come to the end of another difficult year in global health, we must ask ourselves: What can we do to build a more equitable world?
Read more