Record numbers of migrants are transiting through Mexico in search of safety and security. Learn more about the greatest risks and health challenges they face.

The migration dynamics of people traveling through Mexico to reach the United States have changed dramatically in recent years.

Since the U.S.-Mexico border reopened in 2021, the number of migrants transiting through Mexico to the U.S. has skyrocketed. For many migrants, the factors for leaving have worsened, including violence, political instability, exacerbated poverty levels due to the pandemic, and the impacts of climate change on extreme weather, agriculture, and livelihoods.

The route migrants travel through Central America is harrowing, some of which must be traveled on foot. Migrants—many of whom travel from other countries, including El Salvador, Guatemala, Honduras, Nicaragua, and Venezuela—risk exhaustion, hunger, exposure to diseases, violence from criminal gangs, robbery, and sexual violence. Many of these risks continue upon their arrival to Mexico, including sexual abuse and human trafficking.

These observations are part of a recent Migrant Needs Assessment Project HOPE conducted in Mexico to better understand the level of need, barriers to care, and effective recommendations to improve health care for migrants transiting across Mexico.

One of the report’s authors is Chessa Latifi, Project HOPE’s Senior Program Advisor for Humanitarian Response and the Latin America/Caribbean Region. As part of our Global Health team, Chessa supports our programs in Mexico and Haiti that focus on health, mental health, and gender-based violence, as well as our Emergency Response operations.

Here are five things to know about Central American migration and the greatest health needs facing those migrating through Mexico.

1. Countries of origin are shifting. The majority of migrants are from Mexico or the Northern Triangle—El Salvador, Honduras, and Guatemala—but an increasing number of Venezuelans, Haitians, and Cubans are migrating north in search of safety or better opportunities.

The root causes of migration are often the same, regardless of where the point of origin is: exacerbated poverty, food insecurity, violence due to a dominating drug trade, and the impacts of climate change on extreme weather, agriculture, and livelihood.s

2. Routes change. There isn’t one specific way for migrants to head north. Often, migrants face challenges that force them from one established route to another, including violence from cartels and government interventions. Bus companies in Mexico cannot sell tickets to people who do not have permanent residency in Mexico, and immigration checkpoints along the northern border in Mexico force migrants to pay “coyotes” to reach the north.

3. Because routes change and the journey is so difficult and dangerous, access to health care is difficult. Migrants don’t want to seek medical care in primary health centers unless there is an emergency. They worry that stopping for help might make them lose their guide or group or be identified and reported to the Mexican government. Most clinics serving migrants report the top morbidities to be skin injuries, gastrointestinal disease, and respiratory tract infections.

4. Children suffer the most during their long journey northward. They often arrive at shelters malnourished and dehydrated because of a lack of food and clean water. If detained by the U.S. government as they cross the border, some have been separated from their families in detention. If caught by cartels on the Mexican side of the border, they risk forced recruitment into cartels and gangs.

5. Sexual violence against women and children is rampant. Some migrant women report taking contraceptives before starting the journey northward to prevent pregnancy in case of rape or sexual trafficking. In past years, most migrants were men, but there is an increasing number of families and unaccompanied minors.

Women and children are not only at risk of sexual violence, but also human trafficking. More than 150,000 unaccompanied minors were apprehended at the U.S.-Mexico border in FY22, a record number.

The humanitarian needs of migrants continue to grow. The primary health care and mental health care needs to manage the impact of such a traumatic journey remain underserved for migrants. A person only chooses to make the journey north out of desperation and lack of any better option. 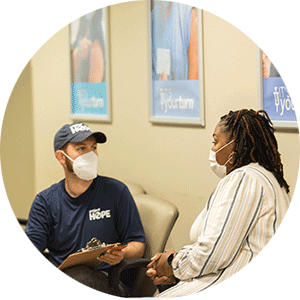