Tens of millions of people remain under lockdown in China as doctors and nurses work tirelessly to fight COVID-19, a virus that has now reached every corner of the world. Here’s what that battle looks like from the inside.

On December 31, 2019, Chinese officials notified the World Health Organization that there were several cases of an unusual illness in Wuhan, a port city on the Yangtze River. They didn’t know it, but the virus was COVID-19, a deadly new coronavirus that would soon infect tens of thousands of people around the world.

COVID-19 has now been confirmed on every continent except Antarctica — but nowhere has been hit harder than China, where millions of people remain under a travel lockdown as the virus continues to spread. And no one is under more pressure to stop it than the doctors and nurses inside the country’s hospitals.

Project HOPE team members in China are living and working on the frontlines of the virus, helping distribute badly needed personal protective gear to hospitals across the country. Here’s what life looks like at the epicenter of what the World Health Organization warns could be the next global pandemic.

“Because Shanghai is far away from Wuhan, everything seemed to be under control at the beginning,” says Dr. Yuan, a respiratory pediatrician at Shanghai Children’s Medical Center. “But on January 20, meetings were held in the hospital: doctors were told to pay more attention to patients with fever who came from Wuhan, and the isolation clinic was built. At that time, I realized this would be a terrible problem.”

As it became clear that China was the epicenter of a major outbreak, Project HOPE began rushing personal protective equipment to hospitals inside the country, donated by our partners MAP International, MedShare, and Latter-day Saint Charities.

HOPE has a long history of training and equipping health care workers in China, including the founding of the HOPE School of Nursing in Wuhan. Many of the nurses working on the frontlines of the virus today are graduates of the HOPE nursing school, which has grown to become one of the premier nurse training schools in China.

Since the virus broke out, HOPE has distributed over 4.5 million pieces of protective equipment including respirator masks, gloves, protective suits, and goggles. That gear is now in use where it’s needed most — including hospital corridors and operating rooms in Wuhan, just minutes away from where the virus first broke out.

As the virus continues to spread unabated, the fight to contain it has been accelerated to almost incomprehensible speeds. Two hospitals in Wuhan were constructed in a matter of days, while a vaccine for the virus was developed in record time and will be ready for human testing in April.

Health officials around the world, meanwhile, are bracing for an epidemic and stockpiling equipment in hospitals.

“People are feeling fear and anxiety,” Dr. Yuan says. “The virus spread very quickly, and the number of infected cases increased day by day. It seems that it’s very easy to get infected by virus carriers, and what’s worse is that some of the carriers may show no symptoms. It’s not safe anymore to hang out, so people stay at home. But staying in a small place for a long time can also make people sick. Many people feel very anxious.”

While it’s yet to be seen how far COVID-19 will spread, what’s happening in China is a preview of what the battle to stop the virus may look like — and the incredible bravery of the doctors and nurses working to stop it.

“The thing we need most is enough personal protective equipment, such as surgical masks, N95 masks, goggles, and disinfectant,” Dr. Yuan says. “Those things may protect us from catching coronavirus, and they are consumed very quickly. We are very grateful to Project HOPE and LDS for donating the protective equipment to our hospital.” 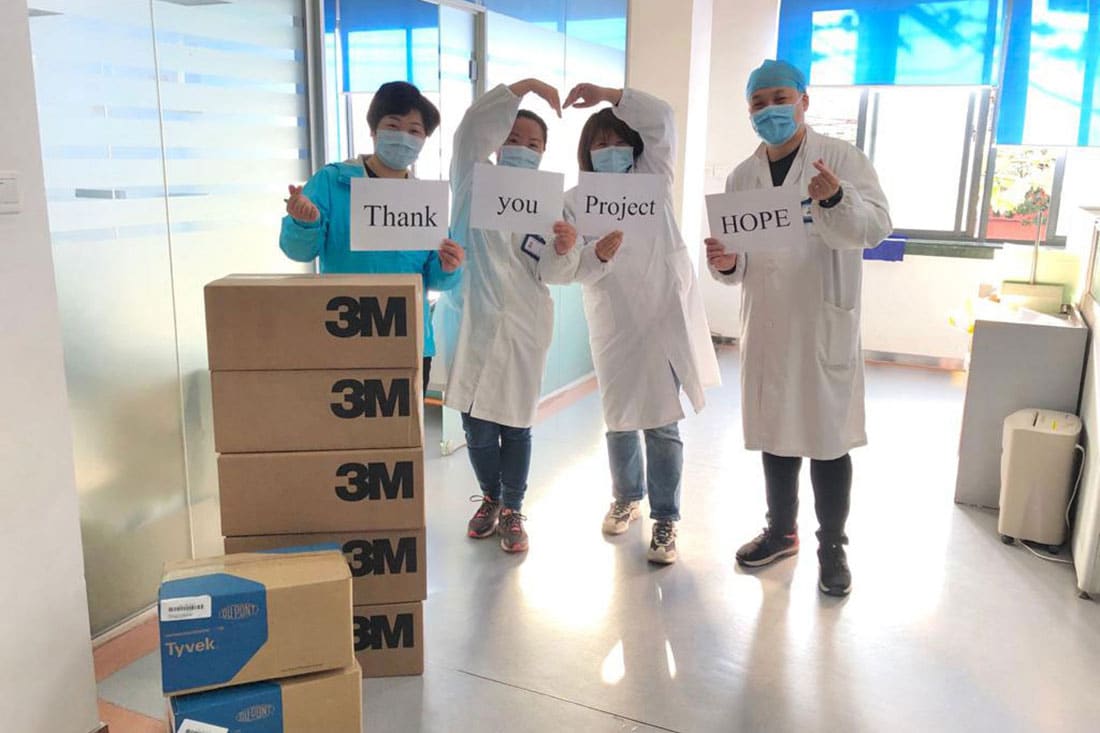 Stories
COVID-19 is a global pandemic that has infected at least 180,000 people around the world. Here are eight numbers that help to understand the scope of the outbreak, and its potential to spread.
Read more

The Coronavirus Outbreak Is A Major Threat To Global Health

Stories
The world urgently needs more health care workers. Here are seven numbers that tell the story of the impending crisis, and what will happen if timely action isn’t taken to close the gap in the years ahead.
Read more