There is a parallel history linking the Haven-class hospital ships’ HOPE and Sanctuary. Both are now memories of an age past, with a proud and altruistic heritage that binds us together.

I’m here in Brownsville, Texas to pay tribute to the end of an era and to say goodbye to a proud linkage with Project HOPE history.  Here, at the Port of Brownsville, ESCO Marine is currently in the process of dismantling and scrapping the USS Sanctuary, the very last remaining Haven-class hospital ship and the sister ship of the original SS HOPE. Both ships have a proud and storied past and, while their ultimate paths diverged, they shared an identity shaped by compassion and the delivery of health care to those in need around the world.

The Haven class of hospital ships was built for the United States Navy during World War II. Haven-class ships also served in the Korean War and the Vietnam War. The first ship was laid down in July 1943, while the last was launched in August 1944. In that span the United States produced six of these ships.  The USS Haven was the lead class of the ship, followed by the USS Benevolence, the USS Tranquility, the USS Consolation, the USS Repose, and the USS Sanctuary.

The USS Consolation was commissioned in the U.S. Navy on 22 May 1945. She served in World War II relieving US prisoners of war in Japan. In 1950, the Consolation was the first ship to serve the United Nations forces during the Korean Conflict and the first ship to receive casualties directly by helicopter. On 30 December 1955, she was decommissioned by the Navy, leased to Project HOPE in March 1960 by the Eisenhower administration, and rechristened the SS HOPE. From 1960 to 1974, the ship operated under charter as our civilian hospital ship and made 10 voyages around the world delivering humanitarian assistance and health education. The SS HOPE was returned to the Navy in 1974, stricken from the rolls, and then scrapped in 1975.

The SS HOPE’s sister ship, the USS Sanctuary, was commissioned in the U.S. Navy on 20 June 1945 and, like the HOPE, was charged with repatriating US prisoners in Japan.  After undergoing modernization, she was put back into action during the Vietnam War, serving as a floating hospital for US casualties until 1971. Her unofficial motto was “You find ‘em.  We bind ‘em.  Open 24 hours.”  She earned 11 battle stars for action in Vietnam.  After a variety of other activities, the USS Sanctuary was sold to an organization in Maryland in 1989, where it sat in the North Locust Point Marine terminal in Baltimore. In 2011, due to EPA-related concerns, the ship was purchased by Potomac Navigation at auction and towed to the Port of Brownsville, TX to be sold for scrap.  Once in Brownsville, ESCO Marine purchased the ship and is currently in the process of taking her apart. 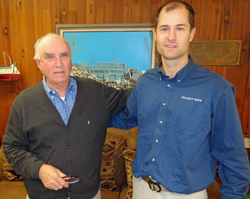 The CEO of ESCO Marine, Mr. Richard Jaross, was the CEO of Andy International, the company that scrapped the SS HOPE in Brownsville. As a matter of fact, the HOPE was dismantled one slip over from the current mooring of the Sanctuary.  He remembers the HOPE well and has an impressive personal collection of her memorabilia. He also said the HOPE did not retire without a fight.  On its way to the scrap yard, she was struck by a tug boat in the Delaware River and began to sink. After emergency repairs, she stayed afloat and made it to Brownsville. However, after reaching the port, she then rammed the jetty which ripped a hole in the hull. Many of the rooms below decks flooded, making the initial work a challenge. Once the work began, onlookers flocked daily and lined the streets in order to get a glimpse of the HOPE.  At one point, Mr. Jaross said, a group of children began to protest the scrapping of the HOPE. He finally brought the leader of the group onto the ship and explained the process and how the ships were recycled. This appeased the children and the work finished without further incident. Everything on the HOPE was given away, donated, kept for souvenirs, or sold.  Brass door knobs from the ship sold at $20 each.  The Iron Cow that made milk from sea water was removed. Mr. Jaross was able to preserve one of the original SS HOPE milk cartons.  Some of the pieces were given to various entities around Brownsville, such as the Hope Park, adjacent to the International Bridge. Of course Project HOPE is in possession of the ship’s wheel and brass bell. 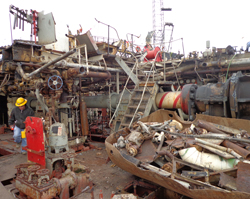 Today, there is not much left to see of the once noble USS Sanctuary. To me, she looks like an anthill that had the top two-thirds cleaved off, with her insides bare and a flourish of activity below as she is torn apart. Very little remains as most of the metal has been cut away and sold. I was able to salvage several items from the Sanctuary to bring back to HOPE Center for display. The most notable is the brass steam whistle from the smokestack.

There is a parallel history linking the Haven-class hospital ships’ HOPE and Sanctuary. Both are now memories of an age past, with a proud and altruistic heritage that binds us together.  While the ships themselves may no longer be present, their legacy lives in those that remember, such as the HOPE Alumni Association, and those that continue to strive to improve the health of underserved populations around the world. This relationship, notably seen by Project HOPE and the U.S. Navy’s current Humanitarian Civic Assistance missions, perseveres to this day.