It’s been a year since a devastating earthquake and tsunami hit the Indonesian island of Sulawesi, but it looks and feels like just yesterday.

When we first landed in Palu, it took me a moment to realize all of the rubble wasn’t construction — it was destruction. We drove by houses of rubble, towards a horizon of rubble. Entire villages are gone — and so is the coastline.

The magnitude of the disaster sunk in for me when I walked over a village swallowed by liquefaction – a phenomenon when water and soil mix underground and essentially turn into quicksand. The smallest remnants were the most jarring: I saw children’s backpacks sticking halfway out of the ground and pieces of tile scattered across the earth, the leftovers of the kitchen floors of families who had disappeared.

The coastline is another scene of surreal devastation. There’s a mosque rising up out of the water, which you can still walk in to at low tide, a bridge that leads nowhere suspended in midair, and a hotel that looks like it’s been bombed. The new coastline is a mass gravesite of those who were at a festival on the beach at the time the tsunami hit — there are hundreds of wooden memorial stakes set into dunes of rubble. All day every day, people come to the shore to sit and stare off into the ocean, mourning their loved ones who were washed out to sea. Some are still waiting, hoping they’ll come back. 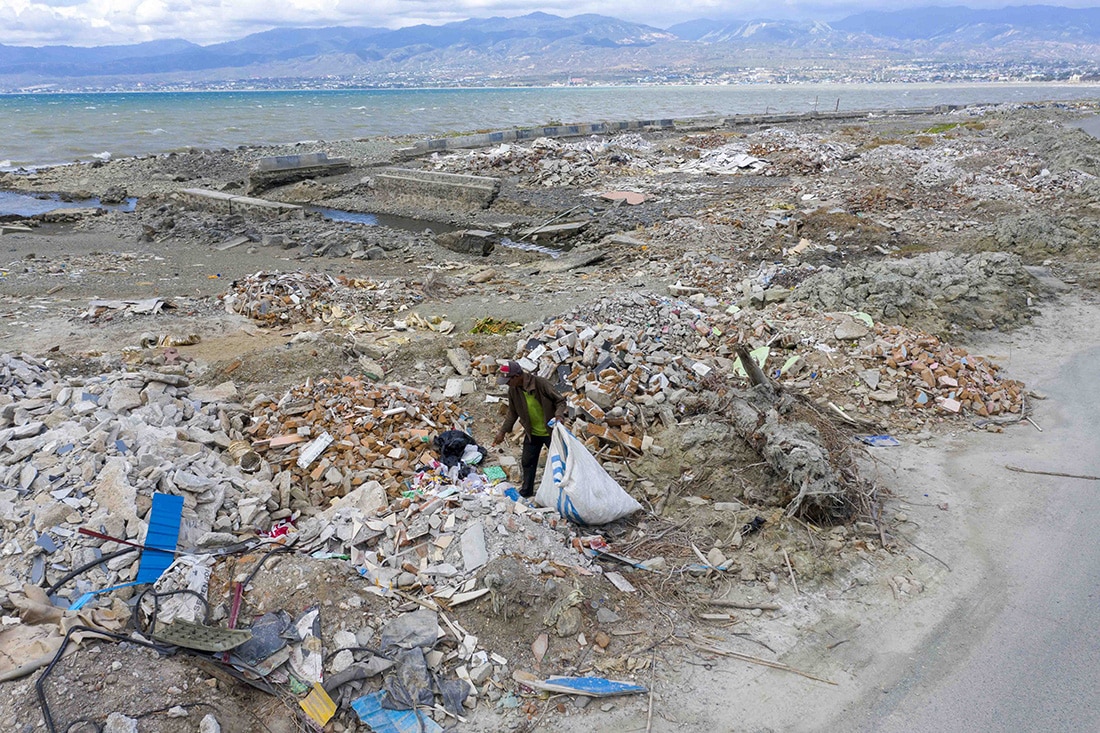 The island had been issued multiple warnings that day, but they went largely unregarded. In reality, it’s hard to imagine what anyone could’ve done to prepare for a disaster of such a scale. Everywhere we went we heard tearful and emotional recounts of the day from survivors — where they were, what they were doing and what, or who, they lost.

Fadlun, 40, was boiling water in her kitchen when the earthquake started. The shaking splashed hot water across her body, but she ignored the pain and attempted to run. Her twin sister, Fajran, lives next door and was sitting on the floor when the tremors shook her home. She tried to escape, but the front door was jammed shut. The lock was rusty, and Fajran nearly lost a finger when she pried it open. It’s Fadlun who sustained the most serious injuries, though — the boiling water severely burned her arm and chest.

Both sisters managed to escape. With their families, they waited for help in a tent, too afraid to go back into their homes. Others slept under trees, below a sky of dust. They waited for days. They worried. They prayed. “I surrendered myself to God,” says Fadlun, who was in agonizing pain.

Everyone we met talked about waiting for help – not knowing if it would ever come — and on the fifth day, Project HOPE arrived.

Fadlun says the Project HOPE doctors were surprised when they saw her; she’d been at great risk of infection, considering the severity of her burns and her exposure to the dust and grime, but had somehow been spared. After initial treatment, both sisters were sent to the hospital – Fajran’s doctors wanted to amputate her finger, but she refused – and Fadlun stayed seven days to receive treatment for her burns. Today, both sisters speak with heart-rending emotion when remembering the disaster – their scars a constant reminder of the fear and pain.

In the weeks following the disaster, Project HOPE provided screening and treatment to more than 13,600 people like Fadlun and Fajran, assisting health workers overwhelmed by the influx of patients.

Anisia, 65, is another survivor who sustained serious injuries and had to wait days for help. She was eating dinner when the earthquake came, and a cabinet fell on her, pinning her down and crushing her shoulder and hip. “The pain was excruciating,” she says. “I could not sleep and I could not get out of bed.” Project HOPE gave her medicine and took her to the hospital, but she still has difficulty walking because of her hip.

For those who were already sick, the disaster disrupted access to critical medical attention. Fatma’s three-month-old baby girl had a fever and a cough, and went six days without medicine. Fatma was afraid she might die, until HOPE arrived and reopened the Dolo community health center.

The Project HOPE response extended beyond acute medical support. To prevent malaria and other vector-borne diseases, we conducted surveillance and distributed insecticide nets to over 58,000 households. Ichwan, Project HOPE’s team leader, told us how he rode overnight on the back of a motorcycle in the pouring rain to pick up the nets. Conditions were treacherous, but procuring the nets meant preventing bouts of malaria and dengue.

To restore access to clean water and sanitation, we installed three water purification systems at health clinics and trained unit operators and community members in their continued maintenance and use. When we visited the system serving the community of Dolo, there was a steady stream of people arriving to fill empty bottles and gallon jugs. We spoke with a number of people who rely on the facilities for their drinking water. One farmer, Isran, saves 50,000 rupiah each month (about US$3.50) by filling gallon jugs at the facility. He earns about 1 million rupiah each month (US$70), so the savings is significant, and he spends it on vegetables for his family.

Irma was head of administration at the Dolo health clinic at the time, and is now director of health services. After the earthquake, she immediately sought out nurse Rizka to take stock of their medicine and prepare to do what they could. She knew there would be many casualties, and that they didn’t have enough doctors to assist everyone who’d need help. It wasn’t until Project HOPE arrived that they were able to reopen the clinic.

Irma told us they feel as though they have become “like family” with the Project HOPE medical team over the last year. “We will remember Project HOPE forever,” Irma says. “Because of Project HOPE, the community got help very quickly compared to others.”

Every time I have the opportunity to travel I witness the strength of women in the communities where we work. They carry the weight of unimaginable responsibility, and tell stories of incredible resilience in the face of extreme adversity.

When a disaster strikes, there’s a global response to meet urgent needs in the first 30 to 60 days. But those needs almost always persist long after the first few months. The devastation lives on. It lives on in the terrain, in the physical evidence left behind, and it lives on in people’s minds — you can see it on their faces and in their eyes. It’s a long and sometimes never-ending road to recovery. And in places like Indonesia, highly vulnerable and susceptible to climate change, people live under constant threat of the next disaster.

In today’s climate, our emergency response work is more important than ever — and we have some of the very best on our team ready to mobilize to support health systems, prevent disease and save lives. Our ability to move quickly is critical — it means more lives saved — and we know how to work closely with ministries of health and the public health sector to do so.