In Sierra Leone, HOPE is empowering health workers to strengthen maternal, neonatal, and child health and put an end to preventable deaths.

Sierra Leone is a country of dynamic beauty, known for its rich natural resources and picturesque vistas of rainforests, mountains, and beaches. But it is also one of the poorest countries in the world — 60% of Sierra Leoneans live below the national poverty line. Conflict, political instability, and natural disasters have put a measurable strain on the country in the past few decades. Increasingly unpredictable rainy seasons have jeopardized food and water supplies, and put many people in life-or-death situations.

Through the lens of health, Sierra Leone is one of the most dangerous places to live. As the country continues to recover from the deadly 2014 Ebola outbreak, its people — especially women and children — suffer from an alarming gap of trained health workers and a life-threatening lack of medicine and facilities. The majority of the country’s population lives in rural areas, where access to basic health services is especially limited.

The 2014-2016 Ebola outbreak killed 21% of the country’s entire health workforce, crippling an already overburdened health system. The gap is still felt today, more than five years later: As of 2015, there were only 245 doctors serving a population of over 7 million people. That’s 1 doctor for every 31,000 people, or, for comparison, just 20 doctors serving all of Washington, D.C. Without health workers, thousands of new and expecting mothers are at heightened risk of premature death, and so are their children.

The prevalence of maternal and infant mortality

The maternal mortality rate is higher in Sierra Leone than anywhere else in the world, at 1,360 deaths per 100,000 live births — a rate six times higher than the global average, and a far cry from the Sustainable Development Goal target of less than 70 deaths per 100,000 live births. One in 17 women in Sierra Leone won’t survive pregnancy or delivery.

Sierra Leone also has one of the highest infant mortality rates in the world, at 78 deaths per 1,000 live births. Around 21 babies die each day before reaching their first month mark.

High mortality rates are the result of a handful of pervasive challenges, including poverty, a lack of clean water and sanitation, poor nutrition, and limited access to quality health services. The reality is that most of these deaths could be prevented if women are reached with the right information and skilled care.

Our history in Sierra Leone

Project HOPE’s work in Sierra Leone began in 2014 in response to the government’s call for assistance to help contain the Ebola outbreak. During the response, we recognized the need to improve health outcomes for women, newborns, and children, which has become the primary focus of our ongoing work in the country today.

Training programs focus on essential and special newborn care. Promoting the adoption of Kangaroo Mother Care is an important part of this work. KMC is a low-cost warming technique for premature and low birthweight babies that involves wrapping the baby skin-to-skin with its mother. In countries where hospitals are ill-equipped – where there are few incubators, or none at all – the KMC method can be a lifesaver.

We established the country’s first two KMC units at Ola During Children’s Hospital and Bo District Hospital, which serve as centers of excellence for learning for other hospitals throughout Sierra Leone. We also support the renovation of neonatal care areas, and the creation of learning labs where health workers are able to continue their education.

“The Kangaroo Mother Care initiative is a low-technology intervention for care of small babies through early, prolonged and continuous skin-to-skin contact between the mother and her baby for thermal care,” explains Project HOPE’s Banneh Daramy, a newborn consultant. “Project HOPE trains health workers, who in turn train mothers, how to position and feed their tiny babies, and teach them behaviors for infection prevention and what to do if there are breathing difficulties. The lessons help many premature and low birth weight babies thrive.”

Empowering mothers to manage their own health

HOPE’s footprint extends beyond hospital walls, into the villages where the most vulnerable women and children live.

Through the facilitation of mother care support groups, we reach mothers with the knowledge they need to take care of themselves and their newborns in their own homes and communities. Each group consists of about 20 mothers and is led by a Project HOPE-trained “lead mother.”

Groups meet weekly to learn how to recognize and respond to health issues, and lessons cover everything from the value of exclusive and on-demand breastfeeding to the importance of handwashing. The groups also connect women to the financial education, business training, and loan support they need to build resilience and security.

HOPE’s work has supported drastic improvements in Sierra Leone’s health system, especially for newborn survival. Over the past two years, our KMC units have served more than 630 premature or low-weight newborns.

“The Kangaroo Mother Care program … seemed very strange at first to the mothers — and even to the doctors,” says Nathaniel Soloku, a monitoring and evaluation officer at Bo District Health Management Team. “No one really understood why hospitals should make space for a Kangaroo Mother Care unit. Now the mothers and doctors are very happy about it. It’s become routine and is the best practice for our mothers.”

In villages, HOPE has reached hundreds of women with the knowledge and support they need to care for themselves and their children, save the money they earn, and cover various business and medical expenses.

In Sierra Leone and around the world, HOPE works every day to give all mothers and newborns a healthier start. In 2019, more than 107,000 women, newborns, and children under 5 accessed health services as a result of our work, and 22,000 health care workers received the training they need to save more lives.

Read: “Giving HOPE to the Hopeless: Snapshots from Sierra Leone” > Angella Juana, the head nurse in the Kangaroo Mother Care unit at Bo Government Hospital in Sierra Leone. The country has some of the highest maternal and infant mortality rates in the world. Many of these deaths could be prevented with the right care and resources, but there is a severe shortage of health workers. Mary Aruna, 32, is pregnant, has 2 children (12 and 9), with her first two she didn’t know about exclusive breastfeeding and hospital delivery as PH teaches - she plans to do that now, she had her first two at home. Also learned about family planning which she’ll use now. Learned about hand washing and hygiene through lead mother as well as malaria prevention with mosquito net. BLANKET PHOTO CONSENT SIGNED BY VILLAGE CHIEF AND VERBAL CONSENT OBTAINED IN NATIVE LANGUAGE BY PH STAFF 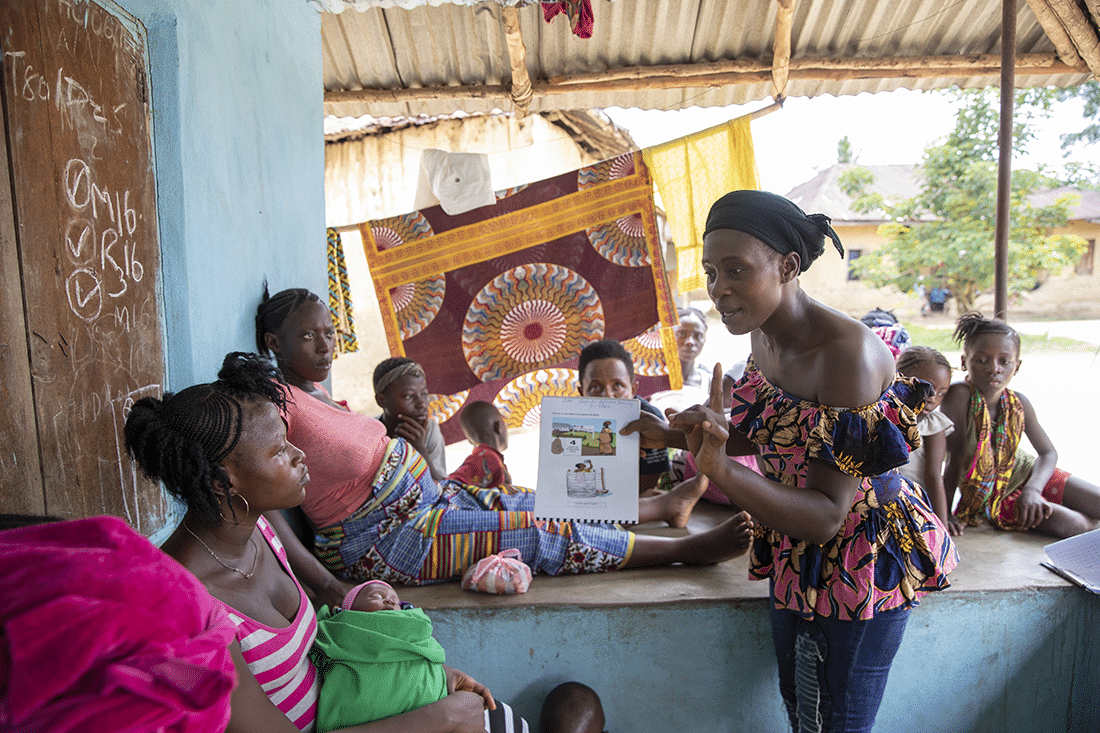 Giving HOPE to the Hopeless: Snapshots from Sierra Leone

Sierra Leone is a country of rich natural beauty, but it is also one wrought by natural disasters, political instability and health crises — a country where having a safe pregnancy and raising a healthy baby is more challenging than it should be.
Read more

Banneh Daramy, a Project HOPE newborn consultant, dedicates her energy and expertise to improving health for fellow Sierra Leoneans — saving lives in a country with some of the world’s highest maternal and infant mortality rates.
Read more