The world urgently needs more health care workers. Here are seven numbers that tell the story of the impending crisis, and what will happen if timely action isn’t taken to close the gap in the years ahead.

Health care is a human right — but without health workers, there aren’t health services. And the world is already short more than 7.2 million.

While the gap is already felt deeply in the most desperate situations, it is a threat to every country on the planet: Without more health workers, millions of people will go without the attention they need to survive. That’s why training and equipping them is at the heart of our work at Project HOPE.

Here are seven numbers that help to explain the magnitude of the shortage, and what’s projected for the years ahead.

The number of health care workers the world will be short by 2030.

The world will need 80 million health workers to meet the demands of the global population by the end of the decade — double the number of health workers that existed in 2013. But without intervention, we’ll only have 65 million workers worldwide, leaving a gap of 15 million and causing serious consequences for the health of billions of people around the world.

Several key factors contribute to the shortage, including a growing, aging population, an aging health workforce, rapid increases in chronic diseases, and the limited capacity of health education programs. That’s 30 nurses for every 10,000 people in the world’s most populous country. (For comparison, there are three times as many nurses for every 1,000 people in the U.S.) This ratio makes it nearly impossible to meet the demands of the country’s growing, and aging, population on any day — but it’s especially magnified in times of emergency. As the novel coronavirus COVID-19 spreads, China’s nurses scramble to manage the massive influx of patients exhibiting flu-like symptoms.

On the frontlines of health emergencies, health workers are often the most at risk of contracting infectious diseases when outbreaks strike. Perhaps this is nowhere more apparent than in Sierra Leone, where a fifth of the entire health workforce died in the 2014 Ebola outbreak. Today, there are only 165 doctors serving a population of 7 million people, or one doctor for every 42,400 people — a dismal ratio anywhere, but especially in a country with some of the highest maternal and infant mortality rates in the world. Most of these deaths could be prevented or treated with access to quality care.

The growing need for health workers is also felt in the U.S. In fact, it’s predicted that upper middle-income countries will experience the highest growth in the demand for health workers, which is why it’s especially problematic that one-third of nurses in the U.S. will retire in the next 10 to 15 years. By 2024, as many as 700,000 nurses are expected to retire or leave the workforce, and there are already some 1.2 million vacancies to fill.

It should be hopeful that nursing is one of the fastest-growing occupations in the country, but the nursing-education system hasn’t been able to keep up with swelling demand; in 2012 alone, U.S. nursing schools had to turn away over 79,650 qualified applicants due to insufficient resources.

That’s two out of every five doctors. The Association of American Medical Colleges predicts a shortage of anywhere from 46,900 to 121,900 primary care physicians and specialists in the U.S. by 2032, underscoring the urgency to enroll and train more aspiring doctors before it’s too late.

The number of countries that fail to meet the basic standard of health care workers.

The accepted universal standard is 23 skilled health professionals per 10,000 people. But only a little over half of countries meet the threshold. Countries across sub-Saharan Africa, Southeast Asia, South Asia, and some in Oceania have the greatest shortfalls. Most preventable and treatable deaths take place in these countries — where health care is hard to access and people often go their entire life without ever seeing a doctor or nurse.

The global cost of noncommunicable diseases by 2030.

The growing threat of NCDs like heart disease and diabetes doesn’t just take a dangerous toll on our health — it also comes at a steep economic cost. NCDs are already responsible for 71% of deaths worldwide; if further steps aren’t taken to reverse the trends and optimize health workforce efficiencies, these diseases could cost the world $30 trillion by the end of the decade and push millions of people below the poverty line.

The percentage of doctors who are women.

More than 70% of doctors are male, and more than 70% of nurses are female. These figures expose a significant gender imbalance in the workforce and disparities in health employment and education. Inequity calls for action — we need more health workers, but we also need to develop a healthy workforce. Steps must be taken to promote gender balance and sustainability, with a focus on training and empowering the female health workforce. 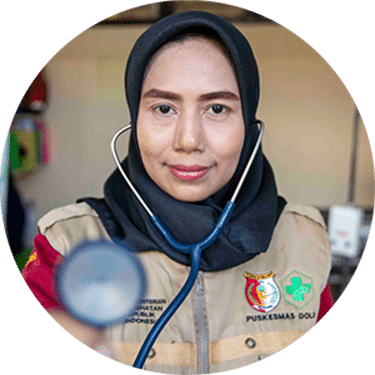 In Malawi, Project HOPE is empowering young women to take control of their lives —and find a network of support to build a healthier future for their families.
Read more